Shriek: An Afterword: A Novel (The Ambergris Trilogy #2) (Paperback) 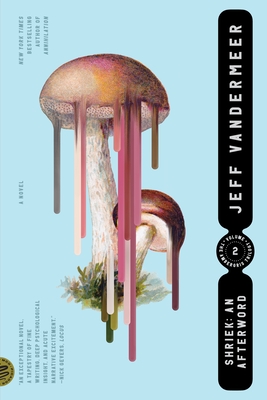 This is book number 2 in the The Ambergris Trilogy series.

From the author of Borne and Annihilation comes the paperback reissue of his cult classic Shriek: An Afterword.

An epic yet personal look at several decades of life, love, and death in the imaginary city of Ambergris—previously chronicled in Jeff VanderMeer’s acclaimed City of Saints and Madmen—Shriek: An Afterword relates the scandalous, heartbreaking, and horrifying secret history of two squabbling siblings and their confidantes, protectors, and enemies.

Narrated with flamboyant intensity and under increasingly urgent conditions by the ex-society figure Janice Shriek, this afterword presents a vivid gallery of characters and events, emphasizing the adventures of Janice’s brother Duncan, a historian obsessed with a doomed love affair and a secret that may kill or transform him; a war between rival publishing houses that will change Ambergris forever; and the gray caps, a marginalized people armed with advanced fungal technologies, who have been waiting underground for their chance to mold the future of the city.

After reading this introduction to the Family Shriek—part academic treatise, part tell-all biography—you’ll never look at history in quite the same way.

Jeff VanderMeer is the author of Hummingbird Salamander, the Borne novels (Borne, The Strange Bird, and Dead Astronauts), and The Southern Reach Trilogy (Annihilation, Authority, and Acceptance), the first volume of which won the Nebula Award and the Shirley Jackson Award and was adapted into a movie by Alex Garland. He speaks and writes frequently about issues relating to climate change as well as urban rewilding. He lives in Tallahassee, Florida, on the edge of a ravine, with his wife, Ann VanderMeer, and their cat, Neo.