The Uninnocent: Notes on Violence and Mercy (Paperback) 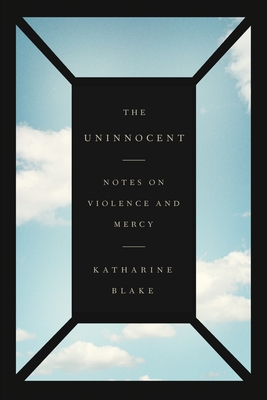 "The Uninnocent is so elegantly crafted that the pleasure of reading it nearly overrides its devastating subject matter . . . a story of radical empathy, a triumph of care and forgiveness." --Stephanie Danler, author of Stray and Sweetbitter

A harrowing intellectual reckoning with crime, mercy, justice and heartbreak through the lens of a murder

On a Thursday morning in June 2010, Katharine Blake's sixteen-year-old cousin walked to a nearby bike path with a boxcutter, and killed a young boy he didn’t know. It was a psychological break that tore through his brain, and into the hearts of those who loved both boys—one brutally killed, the other sentenced to die at Angola, one of the country’s most notorious prisons.

In The Uninnocent, Blake, a law student at Stanford at the time of the crime, wrestles with the implications of her cousin’s break, as well as the broken machinations of America’s justice system. As her cousin languished in a cell on death row, where he was assigned for his own protection, Blake struggled to keep her faith in the system she was training to join.

Consumed with understanding her family’s new reality, Blake became obsessed with heartbreak, seeing it everywhere: in her cousin’s isolation, in the loss at the center of the crime, in the students she taught at various prisons, in the way our justice system breaks rather than mends, in the history of her parents and their violent childhoods. As she delves into a history of heartbreak—through science, medicine, and literature—and chronicles the uneasy yet ultimately tender bond she forms with her cousin, Blake asks probing questions about justice, faith, inheritance, family, and, most of all, mercy.

Sensitive, singular, and powerful, effortlessly bridging memoir, essay, and legalese, The Uninnocent is a reckoning with the unimaginable, unforgettable, and seemly irredeemable. With curiosity and vulnerability, Blake unravels a distressed tapestry, finding solace in both its tearing and its mending.

Katharine Blake is an adjunct professor at Vermont Law School’s Center for Justice Reform. She received her JD, with pro bono distinction, from Stanford Law School, where she was an editor of the Stanford Law & Policy Review. She has taught English at San Quentin Prison and served as director of special projects for the Children’s Defense Fund. She lives with her family in Virginia.

"[Blake's] legal background and her insights yield a thought-provoking consideration of the limits of our criminal justice system." --The New Yorker (Briefly Noted)

"A brutally tragic but mesmerizing read about morality and justice." --Sloane Crosley, Departures

"A sobering meditation on what justice and mercy look like and who gets it and who doesn’t." --Tomi Obaro, Buzzfeed

"[A] deeply thoughtful meditation on trauma, justice, and heartbreak . . . Blake’s incisive prose smoothly moves from one complexity to another, finding hope and humanity in the darkness." --Vanessa Willoughby, LitHub

"Blake ruminates on the nature of heartbreak, forgiveness, family, justice, mercy, and redemption ... Her spare and often gorgeous prose is enriched by frequent quotations from Sumerian proverbs, Saint Augustine, the King James Bible, C. S. Lewis, and James Baldwin, among many others." --American Scholar

"Blake engages with writers like Maggie Nelson and Lauren Groff on “inherited trauma as a ‘silent wind,’” as she grapples with questions of justice, especially involving juvenile offenders in prison for life without parole. Blake’s discursive style and inquisitive mind propel this taut, shapely, moving narrative." --National Book Review

"The writing is beautiful and the insights are weighty; [The Uninnocent] provokes a real interrogation into innocence and guilt, justice and mercy, pain and healing, violence and its conditions." --Arianna Rebolini, Reading Habits

"An intimate and deeply moving meditation on trauma, healing, hope, and the criminal justice system . . . Crystalline prose, incisive inquiries into complex moral and legal matters, and candid reflections on the pain of losing hope make this a must-read." --Publishers Weekly (starred review)

"A wise and moving reflection on some of the most vexing aspects of the American criminal justice system . . . Blake is an evocative writer . . . Despite its brevity, The Uninnocent invites readers to ponder some large and difficult questions." --Shelf Awareness

"Blake is a keen researcher and sharp in her academic assessment of how the criminal justice system handles the young, but it's her ability to blend that report into a shockingly poignant memoir that makes this book a must-read." --Booklist

"The Uninnocent is so elegantly crafted that the pleasure of reading it nearly overrides its devastating subject matter. Blake is an investigator of heartbreak, turning a critical eye on the ways our systems have failed us, and how we fail each other. Through that investigation Blake creates a story of radical empathy, a triumph of care and forgiveness." --Stephanie Danler, author of Stray and Sweetbitter

"The Uninnocent is the riveting and profound story of a woman whose teenage cousin killed a little boy, and yet it is so much more. Katharine Blake has created a brilliant weave of the deeply personal, the intricately legal, an erudite and deeply moving deep dive into families and prisons and mercy, tragedy and love, the law, loss, the sad and beautiful human heart." --Anne Lamott, author of Almost Everything: Notes on Hope

"'The truth changes,' Katharine Blake’s teenage cousin told a courtroom, before he was sentenced to life without parole. This sprawling essay makes me think of the fourth step in AA, the searching and fearless moral inventory. It’s an inquiry—inquiry as action—into justice, forgiveness, the nature of evil, fear and anger, luck. It’s a plea to grant mercy on the people our systems fail and betray—'no room for them down such a narrow way.' The Uninnocent is thoughtful, emotional work, and very moving." --Elisa Gabbert, author of The Unreality of Memory

"In The Uninnocent, Katharine Blake takes on an enormous task: approaching a horrific, senseless act of violence with the acuity and rigor of a lawyer, and the compassion and sorrow of someone who loves the perpetrator. From this tension, she writes toward a deeper, more honest understanding of mercy, justice, culpability, and love. It is a searching, open-hearted work, vast in its implications and tender in its execution." --Jordan Kisner, author of Thin Places: Essays from In Between