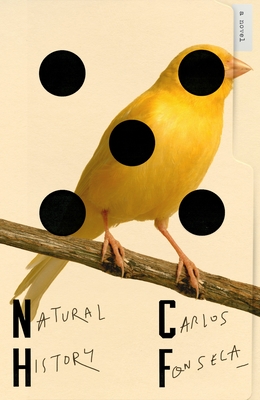 Just before the dawn of the new millennium, a curator at a New Jersey museum of natural history receives an unusual invitation from a celebrated fashion designer. She shares the curator’s fascination with the secrets of the animal kingdom—with camouflage and subterfuge—and she proposes that they collaborate on an exhibition, the nature of which remains largely obscure, even as they enter into a strange relationship marked by evasion and elision.

Seven years later, after the designer’s death, the curator recovers the archive of their never-completed project. During a long night of insomnia, he finds within the archive a series of clues about the true history of the designer’s family, a mind-bending puzzle that winds from Haifa, Israel, to bohemian 1970s New York to the Latin American jungles. As he follows this trail, the curator discovers a cast of characters whose own fixations interrogate the unstable frontiers between art, science, politics, and religion. An aging photographer, living nearly alone in an abandoned mining town where subterranean fires rage without end, creates miniature replicas of ruined cities. A former model turned conceptual artist becomes the star defendant in a trial over the very soul and purpose of art. A young indigenous boy receives a vision of the end of the world. Reality is a curtain, the curator realizes, and to draw it back is to reveal the theater of the obsessed.

Natural History is a portrait of a world trapped between faith and irony, tragedy and farce. An urgent and impressively ambitious novel in the tradition of Italo Calvino and Ricardo Piglia, it confirms Carlos Fonseca as one of the most daring writers of his generation.

Carlos Fonseca was born in San José, Costa Rica, and spent half of his childhood and adolescence in Puerto Rico. In 2016, he was named one of the twenty best Latin American writers born in the 1980s at the Guadalajara Book Fair, and in 2017 he was included in the Bogotá39 list of the best Latin American writers under forty. He is the author of the novel Colonel Lágrimas, and in 2018, he won the National Prize for Literature in Costa Rica for his book of essays, La lucidez del miope. He teaches at Trinity College, Cambridge, and lives in London.

Megan McDowell is an award-winning Spanish-language literary translator from Kentucky. Her work includes books by Alejandro Zambra, Samanta Schweblin, Mariana Enriquez, and Lina Meruane. Her translations have been published in The New Yorker, Tin House, The Paris Review, Harper’s, McSweeney’s, and Vice, among others. Her translations have won the Valle-Inclán prize and the English PEN prize, and been short- and long-listed for the Man Booker Prize. She lives in Santiago, Chile.

100 Notable Books of the Year, The End of the World Review

"[A] wonderfully enigmatic novel . . . [Natural History] reaches across continents and decades, touching on political movements and popular culture . . . With lush prose that owes a debt to translator Megan McDowell, Fonseca weaves the fictional threads of Giovanna’s life into a fabric of real history, grounding his story in events ranging from Sherman’s March to the Sea to the legal battle between sculptor Constantin Brâncusi and the American government that redefined ‘art’ at the turn of the 20th century . . . No detail in this book is superfluous.”
—Joan Gaylor, Christian Science Monitor

“Natural History, ably translated from the Spanish by Megan McDowell, appropriates from the great metaphysicians of postmodern fiction. Its plotting and Delphic aura suggest the paranoiac glitter of Don DeLillo, the cosmopolitan dread of Roberto Bolaño and the imaginative elasticity of Ricardo Piglia.”
—Dustin Illingworth, The New York Times Book Review

“In a calm and lyrical tone, Carlos Fonseca’s works ambitiously seek to incorporate everything. They flirt with unified theories and take joy in connecting ideas in unexpected ways, his protagonists often losing themselves in beguiling mental labyrinths of their own making . . . It is this very bravery that makes it such a pleasure to read his intellectual thrillers about art, nature, and the quest to remake oneself.”
—Jessica Sequeira, Los Angeles Review of Books

“Moving . . . An intellectual puzzle that reminds us that it is also possible to be passionate about ideas . . . Guided by its obsessive characters and their fixations, the book elegantly takes the reader for a tour of Latin America’s labyrinthine contemporary history . . . Deftly translated by Megan McDowell, the mastery, grace, and intelligence of Fonseca’s prose come forth, halfway between the baroque rhythms of Faulkner and the steady pulse of Borges.” —Gunter Silva, Full Stop

"Fonseca is arguably one of the leading Latin American stylists of his generation, and Natural History fundamentally testifies to his belief in writing. At a time of extraordinary accumulation of information, one can think of Natural History as an attempt to redeem the task of writing by placing the creative moment at the center of its polyphony. Is there any greater purpose for literature?” —Diego Azurdia, Music & Literature

“[Natural History] often reminds one of Roberto Bolaño’s masterpiece 2666 . . . A conceptual detective fiction in the tradition of Ricardo Piglia or Don DeLillo . . . [Fonseca maintains] a rhythm that keeps us in suspense for the entire length of this singular narrative. . . . Within this complex game of Russian dolls that Fonseca has constructed, nothing remains more fascinating and enthralling than the experience of reading it.” —Enrique D. Zattara, 3:AM Magazine

“Natural History is more than a story I wish I had written. It is a story I wish I had lived. A fantastic and even phantasmal tale of a quest, a work of art masquerading as a scam, and a contemplation on human lives, the novel is an incisive discussion about the nature and meaning of truth. It is also about the 1960s and their aftermath, the literal and figurative existence of fire, and love faded and otherwise. Reminiscent of Roberto Bolano’s novels in tone and approach, Natural History is a dream that is real and reality that is a dream.” —Ron Jacobs, CounterPunch

“An inspired narrative about family, creativity, and self-destruction. Deftly translated by Megan McDowell, this is an intellectually fertile book, one that features an engrossing plot and several perceptive character studies . . . Braided together, these storylines are rich and thought-provoking; in each, Fonseca’s characters are at war with conformity, engaged in a kind of self-abnegation that looks alluring from afar but, when considered up close, is messy and heartbreaking . . . A well-written, intelligent, and frequently gripping novel, an insightful group portrait of a family that finds fascinating yet tragic ways to test the limits of creativity, faith, and the law.” —Kevin Canfield, World Literature Today

"For readers interested in climate change and the natural world . . . Natural History offers a layered and at times wonderfully beguiling story about art, history, and mystery that hops generations. Animal lovers will delight at the protagonist’s obsession with creaturely furtiveness and wild animals’ natural ability to self-camouflage. And fans of ambitious structure-benders like Italo Calvino will appreciate the novel’s planet-and decade-spanning mystery that connects 1970s New York to the jungles of Latin America." —Amy Brady, Lit Hub

"After just two novels Carlos Fonseca has already established himself as one of the most interesting and ambitious young writers working in Spanish today. His second novel Natural History is a tour de force, an expansive investigation of mimesis, tedium, and the line between art and reality, propelled by an intriguing, polyphonic plot structure." —Juan Toledo, Lit Hub

“Everything is contingent in Fonseca’s story, and nothing is quite to be trusted . . . [Natural History] is an elegant meditation on art, inconstancy, and hiding . . . A treat for fans of Cortázar, Bolaño, and other adepts of the literary enigma.” —Kirkus Reviews (starred review)

“Fonseca’s inventive, complex tale reads like a literary onion, constantly revealing new narratives and layers of meaning . . .The various characters’ perspectives blur the line between memory and fantasy, and their charm will keep readers along for the very intricate ride. Fonseca’s innovative puzzle box of a novel packs a powerful punch.” —Publishers Weekly (starred review)

“Fonseca’s inventive and distinctive style is a delight that serves up narrative twists at every turn of the page.” —The Daily Beast (“The Best Summer Reads of 2020”)

"Like a certain map that appears in its pages, a map in which two versions of a city are superimposed on one another, Natural History reveals a strange reality that lives in the shadows of our own. Carlos Fonseca has written a wonderful, wildly ambitious book that builds a labyrinth from art, politics, religion, love, and obsession." —Chris Power, author of Mothers

"Natural History is a deeply thoughtful, bold, and kaleidoscopic novel, one that, with great audacity and even greater beauty, invites reflection about the weight of legacies and about the masks that make up what we call identity." —Alia Trabucco Zerán, author of The Remainder

"Carlos Fonseca is one of the most gifted and imaginative young novelists in Latin America today." —Chloe Aridjis, author of Sea Monsters

"With Natural History, Carlos Fonseca, a writer of archives, masks, and ruins—that is, a writer with the capacity to create new ways of thinking, an ingenious and obstinate explorer of the abyss—has cemented himself as one of my favorites." —Enrique Vila-Matas, author of the International Booker Prize–longlisted Mac and His Problem