A Lynching at Port Jervis: Race and Reckoning in the Gilded Age (Hardcover) 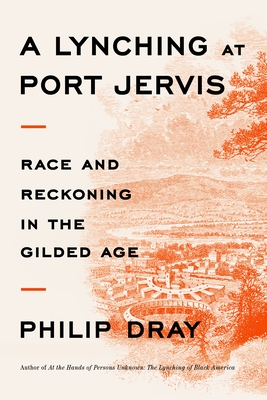 An account of a lynching that took place in New York in 1892, forcing the North to reckon with its own racism.

On June 2, 1892, in the small, idyllic village of Port Jervis, New York, a young Black man named Robert Lewis was lynched by a violent mob. The twenty-eight-year-old victim had been accused of sexually assaulting Lena McMahon, the daughter of one of the town's well-liked Irish American families. The incident was infamous at once, for it was seen as a portent that lynching, a Southern scourge, surging uncontrollably below the Mason-Dixon Line, was about to extend its tendrils northward. What factors prompted such a spasm of racial violence in a relatively prosperous, industrious upstate New York town, attracting the scrutiny of the Black journalist Ida B. Wells, just then beginning her courageous anti-lynching crusade? What meaning did the country assign to it? And what did the incident portend?

Today, it’s a terrible truth that the assault on the lives of Black Americans is neither a regional nor a temporary feature, but a national crisis. There are regular reports of a Black person killed by police, and Jim Crow has found new purpose in describing the harsh conditions of life for the formerly incarcerated, as well as in large-scale efforts to make voting inaccessible to Black people and other minority citizens. The “mobocratic spirit” that drove the 2021 attack on the U.S. Capitol—a phrase Abraham Lincoln used as early as 1838 to describe vigilantism’s corrosive effect on America—frightfully insinuates that mob violence is a viable means of effecting political change. These issues remain as deserving of our concern now as they did a hundred and thirty years ago, when America turned its gaze to Port Jervis.

An alleged crime, a lynching, a misbegotten attempt at an official inquiry, and a past unresolved. In A Lynching at Port Jervis, the acclaimed historian Philip Dray revisits this time and place to consider its significance in our communal history and to show how justice cannot be achieved without an honest reckoning.

Philip Dray is the author of several books of American cultural and political history, including At the Hands of Persons Unknown: The Lynching of Black America, which won the Robert F. Kennedy Book Award and was a Finalist for the Pulitzer Prize, There is Power in a Union: The Epic Story of Labor in America, and Capitol Men: The Story of Reconstruction Through the Lives of the First Black Congressmen. He is an adjunct professor in the Journalism + Design Department at Eugene Lang College. He lives in Brooklyn.

"Dray is an excellent and conscientious storyteller." —Jennifer Szalai, The New York Times

"For enlarging our understanding of America’s enduring enthrallment with the violence, guns and control of white supremacy, A Lynching at Port Jervis is superlative." —Michael Henry Adams, The Guardian (US)

"Fascinating [and] horrifying . . . Deeply immersed in the horrific history of lynching in America, this book exposes that this violence is not merely a Southern aberration, but rather deeply woven into the national culture." —National Book Review

"A cleareyed, powerful account . . . riveting . . . the author is diligent and rigorous in his depiction of the racial animosity undergirding the entire ordeal . . . An important historical study of a topic that remains sadly relevant."
—Kirkus

"Vivid and well-researched . . . An illuminating and distressing look at America’s history of racial violence."
—Publishers Weekly

"A Lynching at Port Jervis paints a vividly disturbing picture of northern racism in the Gilded Age, reminding readers of the pervasiveness of anti-Black terrorism and its lethal consequences for Black Americans."
—Booklist

“Philip Dray’s A Lynching at Port Jervis excavates the details of a rarely discussed 1892 horrific event in the American North, dispelling many of our preconceived notions that lynchings only occurred in the South. Yet what makes Dray even more than a faithful chronicler of this nation’s troubling and troubled past—and trust that we do require chroniclers—is his extraordinary, artful storytelling. Dray eases his readers into this difficult history, displaying so much empathy for our eventual, truth-facing moments.”
—Honorée Fanonne Jeffers, author of The Love Songs of W.E.B. Du Bois

“In this riveting, beautifully written book, Philip Dray shines a spotlight on the forgotten national dimensions of southern barbarism, lynching. He effortlessly weaves the story of a place, a crime, a people, and recovers its broader historical significance. Like his previous work, A Lynching at Port Jervis illustrates the terror of racism as well as the long fight against it. A timely and important book.”
—Manisha Sinha, author of The Slave’s Cause: A History of Abolition (2016)

“Impassioned and painfully relevant, Philip Dray’s A Lynching at Port Jervis probes with gripping precision and deep humanity the hidden, ongoing injuries of the American past.”
—Brenda Wineapple, author of The Impeachers: The Trial of Andrew Johnson and the Dream of a Just Nation

“In this outstanding study of a northern lynching, Philip Dray shows us that the violent practice was/is no southern aberration but lies at the heart of our national culture.”
—Paula J. Giddings, author, IDA, A Sword Among Lions, Ida B. Wells and the Campaign Against Lynching, EA Professor, Emerita, Smith College

“African Americans have been victims of extrajudicial killings since their first arrival on America’s shores. Plantation owners murdered their enslaved workers, white southern mobs lynched thousands after Reconstruction and in recent years police killings of African Americans have become shockingly common. In this gripping account of the lynching of Robert Lewis in a small New York town during the Gilded Age, we can observe in devastating detail how ordinary people can engage in the most horrific acts. Guided by Philip Dray’s humanity and wisdom, this beautifully written account takes us deep into the politics, ideas and terrifying consequences of northern racism.”
—Sven Beckert, Laird Bell Professor of History, Harvard University