Essays Two: On Proust, Translation, Foreign Languages, and the City of Arles (Hardcover) 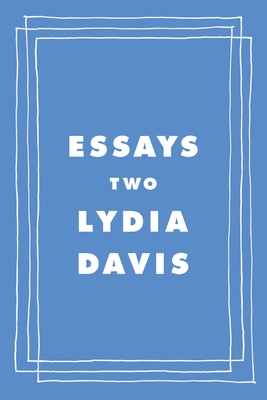 A collection of essays on translation, foreign languages, Proust, and one French city, from the master short-fiction writer and acclaimed translator Lydia Davis

In Essays One, Lydia Davis, who has been called “a magician of self-consciousness” by Jonathan Franzen and “the best prose stylist in America” by Rick Moody, gathered a generous selection of her essays about best writing practices, representations of Jesus, early tourist photographs, and much more. Essays Two collects Davis’s writings and talks on her second profession: the art of translation. The award-winning translator from the French reflects on her experience translating Proust (“A work of creation in its own right.” —Claire Messud, Newsday), Madame Bovary (“[Flaubert’s] masterwork has been given the English translation it deserves.” —Kathryn Harrison, The New York Times Book Review), and Michel Leiris (“Magnificent.” —Tim Watson, Public Books). She also makes an extended visit to the French city of Arles, and writes about the varied adventures of learning Norwegian, Dutch, and Spanish through reading and translation.

Davis, a 2003 MacArthur Fellow and the winner of the 2013 Man Booker International Prize for her fiction, here focuses her unique intelligence and idiosyncratic ways of understanding on the endlessly complex relations between languages. Together with Essays One, this provocative and delightful volume cements her status as one of our most original and beguiling writers.

Lydia Davis is the author of Essays One, a collection of essays on writing, reading, art, memory, and the Bible. She is also the author of The End of the Story: A Novel and many story collections, including Varieties of Disturbance, a finalist for the 2007 National Book Award for Fiction; Can’t and Won’t (2014); and The Collected Stories of Lydia Davis, described by James Wood in The New Yorker as “a grand cumulative achievement.” Davis is also the acclaimed translator of Swann’s Way and Madame Bovary, both awarded the French-American Foundation Translation Prize, and of many other works of literature. She has been named both a Chevalier and an Officier of the Order of Arts and Letters by the French government, and in 2020 she received the PEN/Malamud Award for Excellence in the Short Story.

“As a translator, Davis is known for fidelity, clarity, and, in the case of Proust, decluttering . . . Yet the collection is not, mostly, about problems with other people’s translations but the process of working on her own—a kind of shop talk we’re allowed to listen in on . . . Davis once said in an interview that she would find it ‘almost morally or ethically wrong’ to deliberately impose her own style on a translation. Her scrupulousness is, perhaps, a counterbalance to the translator’s power, and to the peremptory instinct that prompts translation in the first place.” —Elaine Blair, The New York Review of Books

“Whatever the topic, Davis is always superb company: erudite, adventurous, surprising . . . Davis extracts endless thrills from the painstaking process [of translation]. Her essays do a beautiful job of transmitting that satisfaction to the reader . . . A book that contains an incredible amount of life-enhancing morsels.” —Molly Young, The New York Times Book Review

“When Davis breaks down the work of writing, she can be very funny, often at her own expense . . . The pieces in Essays Two brim with daring experiments . . . There is an element of knight-errantry, quest, romantic fatalism as she pursues the elusive foreign language, and often a distant century .” —Ange Mlinko, London Review of Books

"[Essays Two] offers overwhelming proof of the benefits to a writer of a practice of translation . . . [R]eaders with no interest in translation, little taste for essays and zero desire to become writers themselves will nonetheless find themselves burning through its 571 pages with equal parts confusion (What on earth is happening to me?) and relief (Thank God this is happening to me!), and, finally, recognition that the mind we're meeting on the page is awake to the world in ways that feel necessary and new. Essays Two joins Essays One (2019) . . . the two volumes conspiring to a singular astonishment of pleasures." —Wyatt Mason, The New York Times

"We come away from Essays Two with renewed respect for a writer whose grasp of languages is profound, and whose capacity to shape-shift from one to another is quite exceptional." —Phillip Lopate, The Times Literary Supplement

"[Essays Two is] a guide . . . to new dimensions of thought. Davis makes translation seem like a sublime exercise of mind and self." —Adam Colman, The Boston Globe

"While writing about writing can sometimes wander into theoretical, navel-gazing territory, Davis’s approach here is thrillingly concrete. Several pieces describe, in vivid, granular detail, her process for translating the first volume of Proust. She pops the hood and lets us see how the literary gears turn." —Cornelia Channing, Vulture

“In this riveting and erudite collection (after Essays One), Davis documents the adventures and challenges of her work as a translator, moving with ease between the technical challenges posed by a complex text and her personal relationship with literature . . . Thorough, idiosyncratic, and inimitable, Davis is the kind of intelligent and attentive reader a book is lucky to find. Readers, in turn, are lucky to have this collection, a worthy addition to the Davis canon.” —Publishers Weekly (Starred Review)

“I think a good rule for living is always read Lydia Davis . . . Davis on writing is generous and specific in a way that reveals how much smarter she is than almost everyone without being the least bit alienating.” —Jessie Gaynor, Lit Hub

"A celebration of the beautiful and bewildering intermittences of language . . . Davis is a literary treasure." —Jonathan Russell Clark, Star Tribune

“A vivid portrait of the translating life. Davis is known for both her precise, uber-concise short fiction and her translations of Proust, Flaubert, and others. In this immersive collection, she offers a second (following Essays One) in-depth exploration of foreign languages and the art of translation. . . . For those wondering what translators do and how they do it, this collection is a must.” —Kirkus Reviews