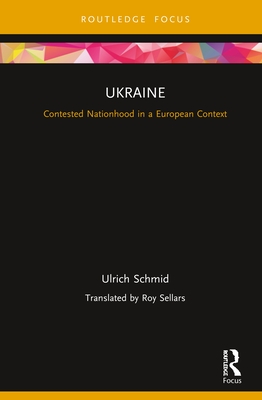 Ukraine: Contested Nationhood in a European Context challenges the common view that Ukraine is a country split between a pro-European West and a pro-Russian East. The volume navigates the complicated cultural history of Ukraine and highlights the importance of regional traditions for an understanding of the current political situation. A key feature is the different politics of memory that prevail in each region, such as the Soviet past being presented as either a foreign occupation or a benign socialist project.

The pluralistic culture of Ukraine (in terms of languages, national legacies and religions) forms a nation that faces both internal and external challenges. In order to address this fully, rather than following a merely chronological order, this book examines different interpretations of Ukrainian nationhood that have been especially influential, such as the Russian tradition, the Habsburg past and the Polish connections.

Finally, the book analyses Ukraine's political and economic options for the future. Can the desired integration into EU structures overcome the concentration of investment of power in the hands of a few oligarchs and a continuing widespread culture of corruption? Will proposals to join NATO, which garnered robust support among the populace in the aftermath of the Russian aggression, materialise under the current circumstances? Is the political culture in Ukraine sufficiently functional to guarantee democratic procedures and the rule of law?