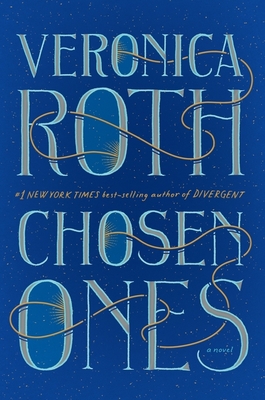 By Veronica Roth
$26.99
Email or call for price

“Two men and three women meet the odd criteria set for the Chosen Ones, who will save the world from the Dark One — whether they want to or not. Years after successfully completing their assignment, three of them are hijacked to a parallel universe to repeat their performance. They are not very happy. Roth’s world-building is exquisite, as is her construction of parallel universe mechanics. And did I mention the maddening, flawed, and entertaining characters? Roth’s first adult sci-fi is a resounding triumph! I’m ready for more.”
— Kay Wosewick, Boswell Book Company, Milwaukee, WI

"A stunning thriller/fantasy/sci-fi chimera like nothing I've read before." — Blake Crouch

"A hugely imagined, twisty, turning tale that leads through the labyrinths of magic and war to the center of the heart." — Diana Gabaldon

Fifteen years ago, five ordinary teenagers were singled out by a prophecy to take down an impossibly powerful entity wreaking havoc across North America. He was known as the Dark One, and his weapon of choice—catastrophic events known as Drains—leveled cities and claimed thousands of lives. Chosen Ones, as the teens were known, gave everything they had to defeat him.

After the Dark One fell, the world went back to normal . . . for everyone but them. After all, what do you do when you’re the most famous people on Earth, your only education was in magical destruction, and your purpose in life is now fulfilled?

Of the five, Sloane has had the hardest time adjusting. Everyone else blames the PTSD—and her huge attitude problem—but really, she’s hiding secrets from them . . . secrets that keep her tied to the past and alienate her from the only four people in the world who understand her.

On the tenth anniversary of the Dark One’s defeat, something unthinkable happens: one of the Chosen Ones dies. When the others gather for the funeral, they discover the Dark One’s ultimate goal was much bigger than they, the government, or even prophecy could have foretold—bigger than the world itself.

And this time, fighting back might take more than Sloane has to give.

Though she was born in Mount Kisco, New York, Veronica’s family moved to Hong Kong and Germany before settling in Barrington, Illinois. In elementary school, Veronica read constantly, but it wasn’t until she got a “make your own book!” kit from her mother as a gift that she thought to write anything of her own. From that time on, she knew she would write for the rest of her life, whether she was published or not. She wrote the manuscript that would become Divergent in her free time while attending Northwestern University, where she graduated magna cum laude with a degree in English Literature with Creative Writing in 2010.

She is a board member of YALLFest, the biggest YA book festival in the country, and YALLWEST, its sister festival. She currently lives in Chicago with her husband and their dog, Avi, whose adorable existence is well-documented on Instagram.

"Roth’s first novel for adults (after the wildly popular Divergent series for teens) is driven by Sloane, a stubbornly unlikable heroine who wears her troubles on her sleeve but doesn’t truly understand her full power until the shocking ending. Those who like twisty power plays and very detailed worldbuilding will appreciate this . . . The many fans of Roth’s YA series will be clamoring for her adult debut, which features magic, lots of sarcasm, and a hint of romance.” — Booklist