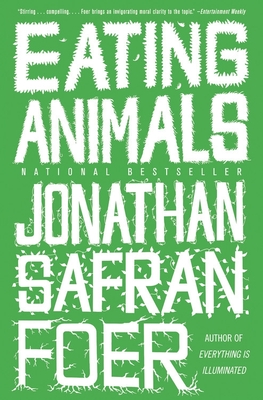 Part memoir and part investigative report, Eating Animals is the groundbreaking moral examination of vegetarianism, farming, and the food we eat every day that inspired the documentary of the same name.

Bestselling author Jonathan Safran Foer spent much of his life oscillating between enthusiastic carnivore and occasional vegetarian. For years he was content to live with uncertainty about his own dietary choices but once he started a family, the moral dimensions of food became increasingly important.

Faced with the prospect of being unable to explain why we eat some animals and not others, Foer set out to explore the origins of many eating traditions and the fictions involved with creating them. Traveling to the darkest corners of our dining habits, Foer raises the unspoken question behind every fish we eat, every chicken we fry, and every burger we grill.

Part memoir and part investigative report, Eating Animals is a book that, in the words of the Los Angeles Times, places Jonathan Safran Foer "at the table with our greatest philosophers" -and a must-read for anyone who cares about building a more humane and healthy world.

Jonathan Safran Foer is the author of Everything Is Illuminated, Extremely Loud and Incredibly Close and Eating Animals. His books have been translated into thirty-six languages. Everything Is Illuminated received a National Jewish Book Award and a Guardian First Book Award, and was made into a film by Liev Schreiber. Foer lives in Brooklyn with his wife, the novelist Nicole Krauss, and their children.

"Eating Animals isn't just an anti-meat screed, or an impassioned case for vegetarianism. Instead, Foer tells a story that is part memoir and part investigative report....It's a book that takes America's meat-dominated diet to task."—NPR, All Things Considered

"Eating Animals carefully, deliberately, takes you through every relevant dimension of factory farming....One sees it from the inside, the outside, the moral high ground, the dithering consumer level, through Foer's family stories, from slaughterhouse workers, animal behaviorists, even from defenders of the system....Foer's aim is not to make your choice, but to inform it. He has done us all a great service, and we, and the animals, owe him our thanks."—Andrew Weil, MD

"A work of moral philosophy....The fact that Foer makes me wonder whether I'm being, at best, a hypocrite every time I eat a piece of beef suggests he's completely successful in at least one ambition." —Geoff Nicholson, San Francisco Chronicle

"Foer's book raises critical ethical questions we all need to face....We shouldn't be polluting the planet to satisfy our appetites."—Huffington Post

"Eating Animals stands as a pop-cultural landmark, destined to be the starting point for a lot of overdue conversations." —Philadelphia Daily News

"For a hot young writer to train his sights on a subject as unpalatable as meat production and consumption takes raw nerve. What makes Eating Animals so unusual is vegetarian Foer's empathy for human meat eaters, his willingness to let both factory farmers and food reform activists speak for themselves, and his talent for using humor to sweeten a sour argument."—O, The Oprah Magazine

"The latest from novelist Foer is a surprising but characteristically brilliant memoir-investigation, boasting an exhaustively-argued account of one man-child's decade-long struggle with vegetarianism... Without pulling any punches--factory farming is given the full expose treatment--Foer combines an array of facts, astutely-written anecdotes, and his furious, inward-spinning energy to make a personal, highly entertaining take on an increasingly visible...moral question; call it, perhaps, An Omnivore's Dilemma."—Publishers Weekly

"The everyday horrors of factory farming are evoked so vividly, and the case against the people who run the system presented so convincingly, that anyone who, after reading Foer's book, continues to consume the industry's products must be without a heart, or impervious to reason, or both."—J.M. Coetzee

"Some of our finest journalists (Michael Pollan, Eric Schlosser) and animal rights activists (Peter Singer, Temple Grandin)--not to mention Gandhi, Jesus, Pythagoras, Aristotle, Thomas Aquinas, John Locke and Immanuel Kant (and so many others)--have hurled themselves against the question of eating meat and the moral issues inherent in killing animals for food. Foer, 32, in this, his first work of nonfiction, intrepidly joins their ranks....It is the kind of wisdom that, in all its humanity and clarity, deserves a place at the table with our greatest philosophers."—Susan Salter Reynolds, Los Angeles Times