Making a Photographer: The Early Work of Ansel Adams (Hardcover) 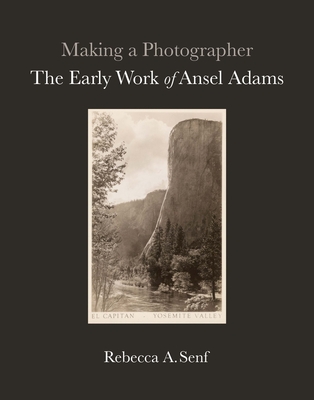 By Rebecca A. Senf, Anne Breckenridge Barrett (Foreword by)
$50.00
On Our Shelves Now

One of the most influential photographers of his generation, Ansel Adams (1902–1984) is famous for his dramatic photographs of the American West. Although many of Adams’s images are now iconic, his early work has remained largely unknown. In this first monograph dedicated to the beginnings of Adams’s career, Rebecca A. Senf argues that these early photographs are crucial to understanding Adams’s artistic development and offer new insights into many aspects of the artist’s mature oeuvre.

Drawing on copious archival research, Senf traces the first three decades of Adams’s photographic practice—beginning with an amateur album made during his childhood and culminating with his Guggenheim-supported National Parks photography of the 1940s. Highlighting the artist’s persistence in forging a career path and his remarkable ability to learn from experience as he sharpened his image-making skills, this beautifully illustrated volume also looks at the significance of the artist’s environmentalism, including his involvement with the Sierra Club.

“[A] beautifully illustrated volume . . . A deep and nuanced understanding of the artist’s work.”—Antiques and the Arts Weekly
“In her brilliant book, Dr. Rebecca Senf allows us to go beyond the pure beauty of Adams’s images. We are brought into a much-needed passion and complexity of his practice.”—Catherine Opie
“This is an important work that augments existing literature in both content and methodology. It will be a standard reference for anyone interested in Ansel Adams.”—Britt Salvesen, Los Angeles County Museum of Art
“Rebecca Senf brilliantly demonstrates how the first two decades of Ansel Adams’s long career—years that are often dismissed as ‘formative’ or ‘immature’—in fact, sow the seeds of the astonishing work that we now identify as ‘classic’ Adams.”—Steven Hoelscher, The University of Texas at Austin
“In this great, approachable read, Senf helps us appreciate the skills and genius of Adams, who inspired millions of Americans to visit, and to ultimately love and support, their National Parks.”—James E. Cook, CEO, Western National Parks Association
“Lavishly illustrated and painstakingly researched, Senf’s book reveals how a 14-year-old visitor to Yosemite became America’s most famous photographer and a passionate advocate for the National Parks.”—Malcolm Daniel, Museum of Fine Arts, Houston