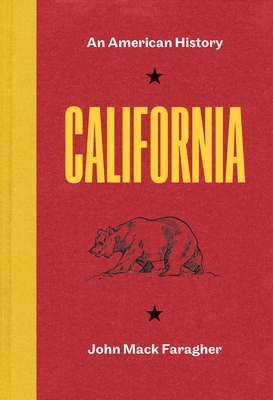 As a non-native Californian who’s been here for 20 years, this is the history book I’ve needed, but didn’t realize I’d been waiting for. Eminently readable & approachable, this offers a comprehensive state history that includes(!) indigenous peoples and Californios, while not pulling any punches as far as white settlement, race relations, and immigration. There’s so much history to this multicultural democratic experiment here that I thought I knew, but had hopelessly wrong – this truly should be required reading for all Californians.

A concise and lively history of California, the most multicultural state in the nation

“Faragher takes the reader on a captivating journey through myriad twists and turns of California’s multicultural history, enlivened by stories of people who rarely penetrate our traditional state chronicles.”—Carlos E. Cortés, University of California, Riverside

California is the most multicultural state in America. As John Mack Faragher explains in this new history, California’s natural variety has always supported such diversity, including Native peoples speaking dozens of distinct languages, Spanish and Mexican colonists, gold seekers from all corners of the globe, and successive migrant waves from the eastern United States and from Europe, Latin America, Asia, and the Pacific Islands.

Faragher tells the stories of a colorful cast of characters—some famous, others mostly unknown—including African American Archy Lee, who sued for his freedom; Sinkyone Indian woman Sally Bell, who survived genocide; and Jewish schoolgirl Marilyn Greene, who spoke up for her Japanese friends after the attack on Pearl Harbor. California’s diversity has often led to conflict, turmoil, and violence but also to invention, improvisation, and a struggle to achieve multicultural democracy.

John Mack Faragher is the Howard R. Lamar Professor of History and American Studies at Yale University, where he also serves as director of the Lamar Center for the Study of Frontiers and Borders. His many books include Women and Men on the Overland Trail, Sugar Creek: Life on the Illinois Prairie, and The American West: A New Interpretive History.

“A masterful history of a place that is both reality and ideal, and central to the modern world.”—Kirkus Reviews (starred review)

“Faragher takes the reader on a captivating journey through myriad twists and turns of California’s multicultural history, enlivened by stories of people who rarely penetrate our traditional state chronicles.”—Carlos E. Cortés, University of California, Riverside

“It is often said that California has little history. But there’s nothing little about this beautifully illustrated and written book, which brilliantly distills the depth and diversity of California’s past.”—Stephen Aron, Autry Museum of the American West

“With verve, clarity, and erudition, John Mack Faragher has wrestled California’s monumental, tragic, triumphant, immense history into a single volume. This is a superb book by one of our most insightful scholars of the far West. A signal achievement.”—William Deverell, Institute on California and the West

“John Mack Faragher understands the promise, and the heartbreak, of California. This is a wonderfully concentrated but comprehensive and evocative history of the most American of states.”—James Fallows, coauthor of Our Towns