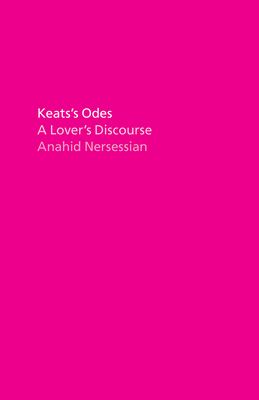 “When I say this book is a love story, I mean it is about things that cannot be gotten over—like this world, and some of the people in it.”

In 1819, the poet John Keats wrote six poems that would become known as the Great Odes. Some of them—“Ode to a Nightingale,” “To Autumn”—are among the most celebrated poems in the English language. Anahid Nersessian here collects and elucidates each of the odes and offers a meditative, personal essay in response to each, revealing why these poems still have so much to say to us, especially in a time of ongoing political crisis. Her Keats is an unflinching antagonist of modern life—of capitalism, of the British Empire, of the destruction of the planet—as well as a passionate idealist for whom every poem is a love poem.

The book emerges from Nersessian’s lifelong attachment to Keats’s poetry; but more, it “is a love story: between me and Keats, and not just Keats.”  Drawing on experiences from her own life, Nersessian celebrates Keats even as she grieves him and counts her own losses—and Nersessian, like Keats, has a passionate awareness of the reality of human suffering, but also a willingness to explore the possibility that the world, at least, could still be saved. Intimate and speculative, this brilliant mix of the poetic and the personal will find its home among the numerous fans of Keats’s enduring work.

Anahid Nersessian is professor of English at the University of California, Los Angeles. She is the author of Utopia, Limited: Romanticism and Adjustment, and the coeditor of the Thinking Literature series, published by The University of Chicago Press.

“Keats’s Odes is brash, skeptical, and tender by turns, offering a fluctuating re-visioning of Keats which is firm in its convictions.  . . . Nersessian’s prose is bold, irreverent, declarative, and feral. Hyperbole and slackness are deceptive: every phrase feels carefully pitched.”
— Times Literary Supplement

“Anahid Nersessian offers a radical and unforgettable reading of the British writer’s odes—one that upends our sense of his poetic project.”
— The Nation

"Intense emotion abounds in this literary blend of analysis and autobiography. . . . In six essays that examine each of Keats’s Great Odes, Nersessian tells a 'kind of love story' between herself and the poems."
— Publishers Weekly

"Nersessian’s knack for tapping into the emotional center of the odes comes from the third part of her book’s approach: including a personal narrative. She isn’t afraid of bringing her educated, loving, and damaged self (or at least the persona of one) into the discussion.”
— Allen Michie

"Two-hundred years after his death, Keats’ Great Odes are still among the most-praised poems in the English language. Nersessian taps her lifelong attachment to Keats to illuminate each of the pieces with a personal and meditative essay."
— The Bookseller

"Thinking through John Keats’s six 'Great Odes,' Nersessian offers up six critical and autobiographical essays that work, in their own right, like odes. Keats’s Odes's is also a terse, stunning pastiche of Roland Barthes’s 'A Lover’s Discourse.' In imaginative, lucid prose, Nersessian proves that criticism can be loving, literary art."
— Boston Globe, Best Books of 2021

"This is a book written in the shadow of the lives, confrontations, and demands that Keats never got to make—a mid-Victorian Keats, say, Keats at a Chartist demonstration, or Keats at the barricades in Paris’s 1848 convulsions. But read it also as a model for what criticism looks like right now; it’s so state-of-the-art that its contemporaneity glows on every page. Urgent, brave, a little elusive at the same time that it is also confrontational, weaving autobiographical vulnerability with critical verve, like a series of letters addressed to an unknown reader who’ll be willing to follow every turn even as they resist, maybe, one or two. Nersessian has, among other things, a gift for lovely figuration. . . . I read it in one big excited gulp."
— Public Books, 2021 "Public Picks"

"The best book about John Keats published at the poet’s bicentenary."
— Jacobin

“The book’s intimacy, vulnerability and determination to provoke is true to Keats, and Nersessian’s genuine feeling for his work is never in doubt. One can’t help but be pleased that two centuries on, Keats’s odes still inspire engagement and love.”

"Whoda thunk anyone had anything new to say about John Keats? Nersessian demolishes the kitschy gift-shop Keats, giving us in exchange a dangerous political poet whom you have to read Marx to fully grok. This never gets tendentious, because it is leavened with a personal narrative modeled on Barthes's Lover's Discourse."
— Michael Robbins

"[Keats's Odes] appears freed by the sensuousness of Keats’s own verse, standing on the verge of becoming something more than literary criticism. While not an imitation of Keatsian style, Nersessian shares his willingness for vulnerability and for writing that enfleshes the experience of being subject to the world because you are a subject in it."
— Los Angeles Review of Books

“Nersessian weaponizes her searing prose—and Keats’s verse—for a very personal and yet deeply political mission. This short book is highly conscious of the world’s evils, but makes a passionate case for humanity in the face of modern capitalism and the climate emergency. It is all the more powerful a reading of Keats because it rejects the simplistic contortionism that political readings often adopt.”
— Camden New Journal

"Keats’s Odes: A Lover’s Discourse by Anahid Nersessian is a deep and accessible delve into the poetry of one of the great Romantic poets. It is the perfect antidote to the way most of us had his poetry foisted on us in school as it's a wonderful combination of reverence for Keats’ sublime writing and reality-based analysis."
— Blog Critics

"In previous books, Nersessian has shown herself an excellent scholar of Romanticism. With Keats’s Odes: A Lover’s Discourse, she proves that her criticism can have memoiristic range, too. . . . What most impresses about Keats’s Odes is how deftly Nersessian moves from Keats’s vulnerability to her own."
— Commonweal

“This book claims to be ‘about’ Keats’s odes. And it is. But it is also about beauty and sadness and love and revolution and how the odes can help us to better understand these things. It is nothing short of a perfect book, one that understands how poetry can transform one’s life. Nersessian is on track to be the Harold Bloom of her generation, but a Bloom with politics.”
— Juliana Spahr

“In a tour-de-force series of revisionary readings, Nersessian makes Keats’s odes new in A Lover’s Discourse; and by the end of this exhilarating book, a new poet emerges into historical and psychological focus as well, neither aesthete nor insurgent, but someone who discovers the radicalism immanent in literary style. On yet another level, Keats’s Odes is a discourse on love as interpretive practice. Demanding, generous, precise, utopian, and unfailingly brilliant, Nersessian reinvents reading itself as a form of critical intimacy for our broken times. ‘If love is anything not laid waste by this world it is free,’ writes this reader. ‘Mine is.’”
— Srikanth Reddy

"Rehearsing the sexual dynamics involved in reading and teaching “Ode on a Grecian Urn,” Nersessian recalls the high school Latin teacher who propositioned her. She then recounts a malign set of encounters with the teacher, with the school administration, and with her friends. In the end, her point is this: that what we think of as the “trigger” in literature is the way that it forces us to remember events, to make us work through pain, and to make us realize that all acts of reading, criticism, and teaching are exercises of power."
— Seth Lerer

"Risky, passionate criticism that—in addition to yielding all sorts of insights into the man and his writing—tests what of her own life the poems might hold (and quicken). This is living in and through and with and against poetry, a brilliant and refreshingly unprofessional book."
— Ben Lerner

“This book is a classic of a new genre, a love letter of literary theory, giving a desired political language to the left's long-quivering heart for the lyric and sensuous knowledge of Keats. We always knew he was the activist's Romantic, and now in articulate and radical analysis, we have an understanding of his poetic form that illuminates our unwavering passion for his Odes.”
— Holly Pester

“I've read Anahid Nersessian's Keats's Odes: A Lover's Discourse a half dozen times now, and it just keeps getting better. Nobody's smarter than Nersessian, nobody's more humane, nobody's more searching, fearless, nobody's more provocative, nobody challenges and cherishes their subject this way. It is that thrilling sensation of meeting a new voice on the page you know you'll spend your entire life following.”
— Kaveh Akbar

"Nersessian reignites interest in Keats’s odes, justly acclaiming what they achieve without being uncritical."
— The Prisma