The Streets of Europe: The Sights, Sounds, and Smells That Shaped Its Great Cities (Hardcover) 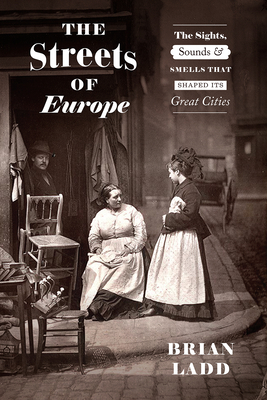 Merchants’ shouts, jostling strangers, aromas of fresh fish and flowers, plodding horses, and friendly chatter long filled the narrow, crowded streets of the European city. As they developed over many centuries, these spaces of commerce, communion, and commuting framed daily life. At its heyday in the 1800s, the European street was the place where social worlds connected and collided.

Brian Ladd recounts a rich social and cultural history of the European city street, tracing its transformation from a lively scene of trade and crowds into a thoroughfare for high-speed transportation. Looking closely at four major cities—London, Paris, Berlin, and Vienna—Ladd uncovers both the joys and the struggles of a past world. The story takes us up to the twentieth century, when the life of the street was transformed as wealthier citizens withdrew from the crowds to seek refuge in suburbs and automobiles. As demographics and technologies changed, so did the structure of cities and the design of streets, significantly shifting our relationships to them. In today’s world of high-speed transportation and impersonal marketplaces, Ladd leads us to consider how we might draw on our history to once again build streets that encourage us to linger.
​
By unearthing the vivid descriptions recorded by amused and outraged contemporaries, Ladd reveals the changing nature of city life, showing why streets matter and how they can contribute to public life.

Brian Ladd is an independent historian who received his Ph.D. from Yale University. He has taught history at the Rensselaer Polytechnic Institute and is a research associate in the history department at the University of Albany, State University of New York.

"Ladd uses contemporary observers’ records to describe not just the visual panoramas of these streets, but also their sounds and even smells, with these latter seldom attractive. Dozens of illustrations and a few photographs from the end of the era add immeasurably to the depth of Ladd’s prose. Urban planners and social historians will discover truths and myths of how European cities evolved into megalopolises."
— Booklist

"Covering the period up to 1900, this study takes you through the ages to the dawn of the modern technological era, bringing into new focus the streets you walk today."
— Anna Aslanyan

"In his wonderful new book, Ladd . . . . adopts a thematic approach, focusing on the period between 1700 and 1900, and making case studies of Berlin, London, Paris, and Vienna. The book opens with a look at the street as workplace. It’s easy to forget how much urban commerce was once conducted in the open air. Dentists would yank out teeth, laundresses would get into a lather, and Paris’s Pont au Change would be aptly named: long ago, it was where money-changers set up their stalls, ever wary of a strong breeze blowing their notes of exchange into the Seine. Then, with the 19th century, the weather-resistant arcades arrived for the toffs and, before too long, we were all headed towards the soulless shopping mall."
— Geographical

With the arrival of the automobile, city streets became transformed, seemingly overnight, into somewhere to go through, not somewhere to go to. Now, in The Streets of Europe, Brian Ladd’s dazzlingly kaleidoscopic overview of city life, city living, and city dying, the streets of the great European cities in the eighteenth and nineteenth centuries spring to life once more, in all their richness, plenitude, filth and glory.”
— Judith Flanders, author of The Victorian City: Everyday Life In Dickens' London

“The Streets of Europe is brimming with information that will cause many readers to think anew about key aspects of urban life and how this has shaped the appearance and functionality of cities of the modern era. Through the frequent use of literary texts, Ladd provides a lively commentary on such gendered acts as leaping on a bus, on city sewage, and on the dangers of getting stuck in traffic (who knew that Franz Ferdinand and King Henry IV were both murdered as a secondary consequence of being held up in traffic!). Ladd is to be commended for his insights that are both place-specific and portable to other sites."
— Fabrizio Nevola, Professor of Art History and Visual Culture, University of Exeter

"Deeply researched, beautifully-written, and appealingly illustrated, The Streets of Europe makes a significant contribution to our understanding of the European city in the 19th century. This is a sensory history and a sensual story told from street level. Ladd’s thinking about the transformations of commerce through the eyes, ears, skin, and nose of the person on the street sheds new light on these spaces. Through its moves across the sources and narrative of strategies of urban and social history, The Streets of Europe offers a clear and powerful account of the transformation of street life in Europe.”
— Leora Auslander, author of Cultural Revolutions: Everyday Life and Politics in Britain, North America, and France

“I thought I knew something about Paris, London, Berlin and Vienna in the eighteenth and nineteenth centuries, but Ladd‘s fascinating, deeply researched book surprised me on every page with his vivid descriptions of the everyday landscape of these cities and the activities, sounds and odors of their streets.”
— Robert Bruegmann, Distinguished Professor Emeritus of Art History, Architecture and Urban Planning at the University of Illinois at Chicago

"Streets of Europe is focused on sensory experience. As in his previous work, Ladd skilfully synthesises the history of architecture with the history of how people relate to it, but here his accounts are filled with firsthand reports of the city’s sights, sounds and smells, and enriched by descriptive colour and relevant insights from diarists, travel writers, authors and artists."
— Slow Travel Berlin