Whose Health Is It, Anyway? (Paperback) 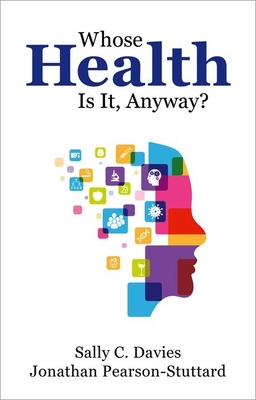 Covid-19 has shown how vulnerable society, our economy, and day-to-day lives are to illness, but despite this we have not yet valued the pivotal role of good health. Our healthcare system is now an illness service with little resilience, importing illness rather than exporting health into communities, not leveraging the digital technology innovations harnessed in other industries. Whose Health Is It, Anyway? outlines why health is truly our most untapped opportunity for prosperity and happiness in the 21st century, individually and jointly as whole nations. Through collectively valuing health - civil society and the private sector - we can radically change the wider health environment which will pay off for all. This book outlines how a 21st century healthcare system should expand the founding principles of the NHS, from illness to a true health service, and encompass a National Care Service. The authors outline the entities and processes that could underpin a new total health system, one that could serve to take us into a happier and more prosperous future.

Sally Davies, Master, Trinity College Cambridge, UK, Jonathan Pearson-Stuttard, Wellcome Trust Clinical Research Fellow, Imperial College London, UK Professor Dame Sally C. Davies GCB, DBE, FRS, FMed Sci is a Haematologist by training who specialized in Sickle Cell Disease. She joined NHS Research and Development in 1998, as Regional Director for North-West Thames Region. She was appointed Director General for Research and Development in the Department of Health in 2004 serving until 2016. In 2010 she was asked to be interim Chief Medical Officer (CMO) and then became the CMO for England and Senior Medical Adviser to the UK Government in 2011. She was awarded a DBE in 2009 and GCB in the 2020 New Year Honours. She was elected a Fellow of the Royal Society in 2014 and a Member of the National Academy of Medicine, USA in 2015. She is currently Master at Trinity College, Cambridge, a position she took up in October 2019. Dr Jonathan Pearson-Stuttard, FRSPH is a Public Health Physician and Epidemiologist at Imperial College London. After completing his medical training at the University of Oxford, he has been awarded multiple competitive clinical-academic research positions from the NIHR and the Wellcome Trust. His research has two main streams spanning non-communicable disease epidemiology. First, using big data and simulation modelling of health, economic and inequality outcomes to inform public health policy. Second, he investigates the increasing multimorbidity and diversification of outcomes in patients with chronic diseases such as diabetes. He was Editor-in-Chief of the Chief Medical Officer's 2018 Report 'Health 2040; Better Health Within Reach.' He is also Vice Chair of the Royal Society for Public Health and Head of Health Analytics at Lane, Clark & Peacock.