Rethinking Suicide: Why Prevention Fails, and How We Can Do Better (Hardcover) 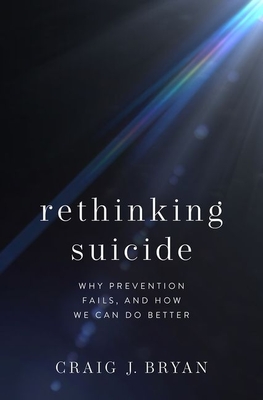 An examination of how suicide prevention efforts largely fail due to the mistaken assumption that greater mental health awareness is the key to saving lives. Over the last two decades, the US suicide rate has steadily grown despite extensive awareness campaigns, wide implementation of suicide prevention programs and initiatives, and increased mental health advocacy. To the confusion and frustration of researchers, healthcare providers, and many others, these efforts have largely failed to reverse the trend. Why do suicide rates continue to climb despite our best efforts? Why aren't we better at this? What are we doing wrong? Rethinking Suicide is a critical examination of what we think we know about suicide, with particular focus on the assumed role of mental illness. Craig J. Bryan, a leading expert on suicide prevention, argues that most prevention efforts have failed because they disproportionately emphasize mental health-focused solutions such as access to treatment and crisis services. Instead of classifying suicide as a mental health issue, careful analysis of research findings suggest it should instead be seen as a highly complex problem with many risk factors - from personal decision-making styles, to the availability of lethal means, to financial uncertainty. As such suicide rates will not be curtailed by conventional solution-oriented thinking; rather, we need process-based thinking that may, in some cases, defy or contradict many of our long-held assumptions about suicide. Rethinking Suicide interweaves the author's firsthand experiences with explanations of scientific findings to reveal the
limitations of widely-used practices and to introduce new perspectives that may trigger a paradigm shift in how we understand and prevent suicide.

Craig J. Bryan, PsyD, ABPP, is a board-certified clinical psychologist and the Stress, Trauma, and Resilience (STAR) Professor of Psychiatry and Behavioral Health at The Ohio State University Wexner Medical Center. His research on suicide has led to the development and refinement of interventions that significantly reduce suicidal behaviors, and has been featured in major media outlets including Scientific American, CNN, Fox News, NPR, USA Today, the New York Times, and the Washington Post. Dr. Bryan has published hundreds of scientific articles and multiple books, and has received numerous awards and recognitions for this work.