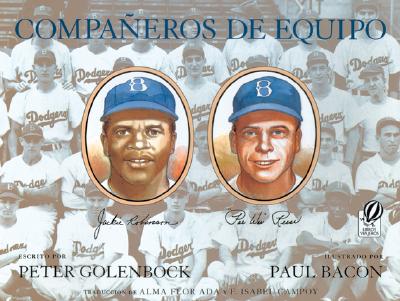 In a time of racial inequality, two men overcame boundaries and learned they were brothers despite the color of their skin. Teammates tells of the importance of standing up for your beliefs, the significance of fighting injustice, and the power of the brotherhood of baseball.

Peter Golenbock is a well-known writer of books about sports, espcecially baseball. He lives in Ridgefield, Connecticut.

THE ACADEMY OF NUTRITION AND DIETETICS, formerly the American Dietetic Association, is the largest group of food and nutrition professionals in the world. As the advocate of the dietetic profession, the Academy serves the public by promoting optimal nutrition, health, and well-being.

F. Isabel Campoy is the author, translator, or anthologist of numerous books in the areas of poetry, theater, fictional narrative, biography, art, and bilingual education. She has been recognized with the Laureate Award from the San Francisco Public Library, the Reading the World Award, and many others. The California Association of Bilingual Education (CABE) has created an award in her name. She is a frequent speaker at national and international conferences on issues of transformative education, second language acquisition, and authentic writing. She lives in Northern California. Visit her at isabelcampoy.com and on Twitter at @fisabelcampoy.