On Being Awesome: A Unified Theory of How Not to Suck (Hardcover) 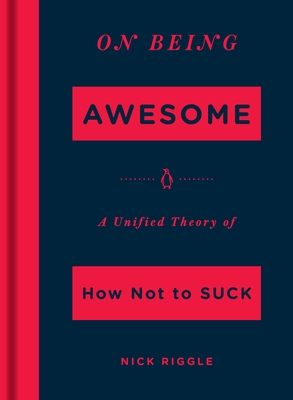 In this lively treatise, pro-skater-turned-philosopher Nick Riggle presents a theory of awesomeness (and its opposite, suckiness) that’s both sharply illuminating and more timely than ever

“Nick Riggle’s fun book is ‘awesome’ by its own definition. But don’t miss its profound ambition, which is to show how philosophy unearths the structure of ordinary language, defines the meaning of life in routine business, and poses the question of how best to live.” —Aaron James, author of Assholes: A Theory

We all know people who are awesome and people who suck, but what do we really mean by these terms? Have you ever been chill or game? Do you rock or rule? If so, then you’re tapped into the ethics of awesomeness. Awesome people excel at creating social openings that encourage expressions of individuality and create community. And if you’re a cheapskate, self-promoter, killjoy, or douchebag, you’re the type of person who shuts social openings down. Put more simply: You suck.

From street art to folk singers, Proust to the great etiquette writer Emily Post, President Obama to former Los Angeles Dodger Glenn Burke, Riggle draws on pop culture, politics, history, and sports to explore the origins of awesome, and delves into the nuances of what it means to suck and why it’s so important to strive for awesomeness. An accessible and entertaining lens for navigating the ethics of our time, On Being Awesome provides a new and inspiring framework for understanding ourselves and creating meaningful connections in our everyday lives.

Nick Riggle dropped out of high school to become a pro-skater, participating in stunt shows, demos, and world class competitions (including three ESPN X Games appearances). He has a BA in philosophy from UC Berkeley and a Ph.D. from NYU, America's leading philosophy program; he is currently a philosophy professor at the University of San Diego. He speaks widely at conferences and workshops and co-organized the first major academic conference on the philosophy of street art and graffiti. He continues to publish in key and notable philosophy journals, as well as more popular outlets including McSweeney's, Aeon (on the high five, awesomeness and suckiness), and Hyperallergic. His current academic work focuses on the role of aesthetic value in human life and is supported by a grant from The Experience Project, a 4.8 million dollar, three-year initiative at UNC Chapel Hill and the University of Notre Dame.

“What is the opposite of an asshole?  It’s the ‘awesome’ person who goes off script in the usual interactions, creating new opportunities for creative expression and social communion. Nick Riggle’s fun book is ‘awesome’ by its own definition. But don’t miss its profound ambition, which is to show how philosophy unearths the structure of ordinary language, defines the meaning of life in routine business, and poses the question of how best to live.”
—Aaron James, author of Assholes: A Theory

“It’s…hard to imagine that anyone else has thought so deeply about the nature of awesomeness: its meaning, its importance, and the ways that true awesomeness is under threat. In On Being Awesome, Riggle offers a careful dissection of the psycho-philosophical categories of sucking…but the book also works as a practical, and surprisingly inspiring, guide to better living.”
—Scientific American Mind

“On Being Awesome is a sweet, irreverent little book. It does the good work of taking the vernacular seriously, and makes gamesome use of analytic philosophy’s central tools to have a little fun. It would make for a great introduction to analytic philosophy for young people, and place to start thinking about what it means to be good citizens of their social worlds. It also stands as a good reminder to those of us who have been at it for a while that we could probably stand to loosen up a little.”
—The Journal of Aesthetics and Art Criticism

“Nick Riggle quickly and convincingly makes the case for the pursuit of awesomeness (and the avoidance of suckiness, its mortal enemy) as a legitimate social aim. . . . In a pluralistic world that fractures further by the minute, being awesome might be the only viable model for the future of our society.”
—Flood Magazine

“Riggle’s book is a welcome addition to the trend of philosophy pitched to the public. Like Aaron James’s Assholes: A Theory and Harry Frankfurt’s On Bullshit, Riggle’s On Being Awesome shows the promise of employing the tools of analytic philosophy to address the nuances of contemporary culture. The book on the whole is written in a clear, vernacular style that’s accessible to a general audience, but at the same time it doesn’t pull its philosophical punches. It’s also loaded with thought-provoking examples drawn from pop culture, civic life, sports, and the arts. More significantly, Riggle aims to craft the very sort of social opening that his book describes. In creating a rich theory of awesomeness, Riggle invites us to play along by adopting his lingo . . . but more importantly by looking at our lives as opportunities to do awesome things. The only question that remains is whether, you, the reader, are down. In short, it’s an awesome book—and, upon reading it, you’ll know exactly what that means.”
—The Philosphers’ Magazine

“Want to bring a little awesomeness into your life? Check out Dr. Riggle’s hilariously insightful book On Being Awesome.”
—Curiosity

“[On Being Awesome] might be the most entertaining study of linguistics taxonomy in philosophy.”
—Big Think