James and the Giant Peach (Paperback) 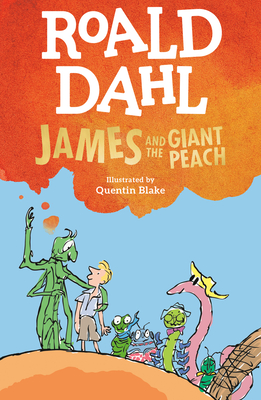 From the World's No. 1 Storyteller, James and the Giant Peach is a children's classic that has captured young reader's imaginations for generations.

After James Henry Trotter's parents are tragically eaten by a rhinoceros, he goes to live with his two horrible aunts, Spiker and Sponge. Life there is no fun, until James accidentally drops some magic crystals by the old peach tree and strange things start to happen. The peach at the top of the tree begins to grow, and before long it's as big as a house. Inside, James meets a bunch of oversized friends—Grasshopper, Centipede, Ladybug, and more. With a snip of the stem, the peach starts rolling away, and the great adventure begins!

Roald Dahl is the author of numerous classic children’s stories including Charlie and the Chocolate Factory, Matilda, The BFG, and many more!

“James and the Giant Peach remains a favorite among kids and parents alike nearly 60 years after it was first published, thanks to its vivid imagery, vibrant characters and forthright exploration of mature themes like death and hope.” —TIME Magazine

Roald Dahl was a spy, ace fighter-pilot, chocolate historian and medical inventor. He was also the author of Charlie and the Chocolate Factory, Matilda, The BFG and many more brilliant stories. He remains the World’s No.1 storyteller.

Sir Quentin Blake, the first-ever Children’s Laureate of the United Kingdom, has illustrated nearly 300 books, including most of Roald Dahl’s children’s books. He lives in London.