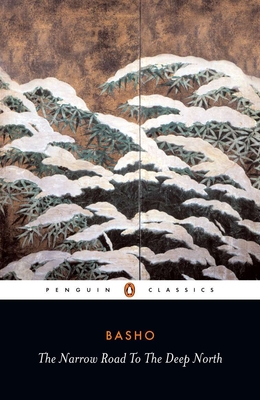 'It was with awe
That I beheld
Fresh leaves, green leaves,
Bright in the sun'

In his perfectly crafted haiku poems, Basho described the natural world with great simplicity and delicacy of feeling. When he composed The Narrow Road to the Deep North, he was an ardent student of Zen Buddhism, setting off on a series of travels designed to strip away the trappings of the material world and bring spiritual enlightenment. He wrote of the seasons changin, of the smells of the rain, the brightness of the moon, and beauty of the waterfall, through which he sense mysteries of the universe. There’s seventeenth-century travel writing not only chronicle Basho's perilous journeys through Japan, but they also capture his vision of eternity in the transient world around him.

In his lucid translation Nobuyuki Yuasa captures the Lyrical qualities of Basho's poetry and prose by using the natural rhythms and language of the contemporary speech. IN his introduction, he examines the development of the haibun style in which poetry and prose stand side by side. this edition also includes maps and notes on the texts.

Basho, the Japanese poet and diarist, was born in Iga-ueno near Kyoto in 1644. He spent his youth as companion to the son of the local lord, and with him he studied the writing of seventeen-syllable verse. In 1667 he moved to Edo (now Tokyo) where he continued to write verse. He eventually became a recluse, living on the outskirts of Edo in a hut. When he traveled he relied entirely on the hospitality of temples and fellow-poets. In his writings he was strongly influenced by the Zen sect of Buddhism.