The Hurly Burly and Other Stories (Art of the Story) (Paperback) 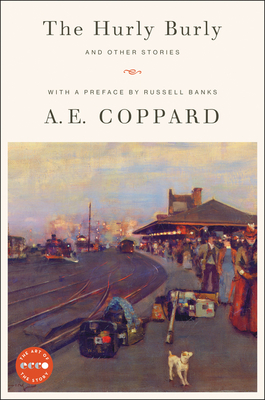 By A.E. Coppard, Russell Banks (Introduction by)
$16.99
On Our Shelves Now

A new collection of short stories from an English master, edited and with a preface by acclaimed author Russell Banks

Originating in the folktale and with an occasional infusion of gothic horror or fantasy, A. E. Coppard’s stories still feel fresh and surprising today. Coppard came to the short story later in life but left an indelible mark on it. Staunch in his belief that the short story was a distinctive form with little relation to the novel, he wove his tales out of the substance of life in the English countryside, with its memorable and distinctive characters.

Reissued with a new preface from award-winning and bestselling author Russell Banks, and including classic tales like “The Black Dog,” “The Handsome Lady,” and “The Higgler,” The Hurly Burly restores this enormously important writer to the position he deserves and introduces him to a new generation of readers.

A. E. Coppard was born in Kent, England, in 1878. He rose to prominence with short stories depicting rural England, tales that contained fantastic elements of supernatural horror and allegorical fantasy. Numerous volumes of his poetry were also published, and the first volume of his autobiography, It’s Me, O Lord! appeared posthumously. He died in London in 1957.

Russell Banks, twice a finalist for the Pulitzer Prize, is one of America’s most prestigious fiction writers, a past president of the International Parliament of Writers, and a member of the American Academy of Arts and Letters. His work has been translated into twenty languages and has received numerous prizes and awards, including the Common Wealth Award for Literature. He lives in upstate New York and Miami, Florida.