Three O'Clock in the Morning: A Novel (Paperback) 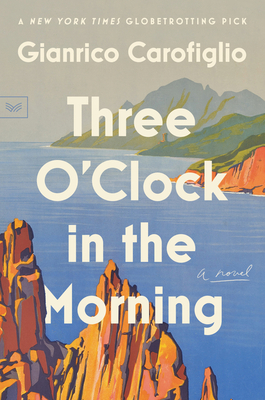 "In a real dark night of the soul it is always three o’clock in the morning." - F. Scott Fitzgerald

A coming-of-age novel—a heady union of Before Sunrise and Beautiful Ruins—about a father and his teenage son who are forced to spend two sleepless nights exploring the city of Marseilles, a journey of unexpected adventure and profound discovery that helps them come to truly know each other.

Antonio is eighteen years old and on the cusp of adulthood. His father, a brilliant mathematician, hasn’t played a large part in his life since divorcing Antonio’s mother but when Antonio is diagnosed with epilepsy, they travel to Marseille to visit a doctor who may hold the hope for an effective treatment. It is there, in a foreign city, under strained circumstances, that they will get to know each other and connect for the first time.

A beautiful, gritty, and charming port city where French old-world charm meets modern bohemia, father and son stroll the streets sharing strained small talk. But as the hours pass and day gives way to night, the two find themselves caught in a series of caffeine-imbued adventures involving unexpected people (and unforeseen trysts) that connect father and son for the first time. As the two discuss poetry, family, sex, math, death, and dreams, their experience becomes a mesmerizing 48-hour microcosm of a lifetime relationship. Both learn much about illusions and regret, about talent and redemption, and, most of all, about love.

Elegant, warm, and tender, set against the vivid backdrop of 1980s Marseille and its beautiful calanques—a series of cliffs and bays on the city’s outskirts—Three O’Clock in the Morning is a bewitching coming-of-age story imbued with nostalgia and a revelatory exploration of time and fate, youth and adulthood.

Translated from the Italian by Howard Curtis

Gianrico Carofiglio is one of Italy’s bestselling authors. He has written short stories, novels, and essays that have been widely translated. He was previously a member of the Italian parliament and an anti-Mafia prosecutor in Bari. His books have sold more than five million copies in Italy.

"Reading this wondrous book is like wandering the streets of a bewitching foreign city, highly attuned to its pleasures and tensions, thrilled by its freedom and possibility. I was deeply moved by its tenderness, its honesty, and, most of all, by the unlikely journey father and son take to discover each other as if for the first time. Carofiglio is a master of voice and atmosphere, which gives this elegiac novel its satisfying and emotional punch." — Christopher Castellani, author of Leading Men

"Their primary task is simple: Don’t fall asleep. Instead they walk and they talk—about love, about mathematics (Dad’s specialty), about food, about philosophy, about life.... subtle precision informs every page, as does a deceptive simplicity laden with all that happens when you’re not paying attention....The title comes from a quote by F. Scott Fitzgerald: 'In a real dark night of the soul it is always three o’clock in the morning.' Here those dark nights arrive with shimmering, unforced beauty, filling the pages with jagged moonlight like the finest neorealist film. A journey by foot: crisp, lean, yet quietly mournful." — Kirkus Reviews (starred review)

“Antonio tells the story in his own unadorned first-person voice from his perspective as a 51-year-old adult, a fact that adds wisdom to this absorbing novel of filial bonding.” — Booklist

"A compelling, compact story...Gianrico Carofiglio’s Three O’Clock in the Morning is profound in its simple delivery." — New York Journal of Books

"This offbeat, nostalgic work reminds us of the things that are most important in life." — BookBrowser

“This is a wonderful book.”  — Antonio D’Orrico, La Lettura

“A coming-of-age journey that is as rational as it is touching, and that builds up some crucial symbolisms in the reflections of a beautiful dryness.”
— Leonetta Bentivoglio, la Repubblica

“It’s not a crime story but the suspense is still there, in Gianrico Carofiglio’s coming-of-age novel.”  — Alberto Riva, il Venerdì di Repubblica

“One of those novels for which you feel sorry in the last pages, when reading slows down to ward off the final word.”  — Il fatto quotidiano

"Three O’Clock in the Morning is a tender, heady and heartwarming tale where the strained conversation of a father and son transforms into a lifetime bond." — Seattle Times