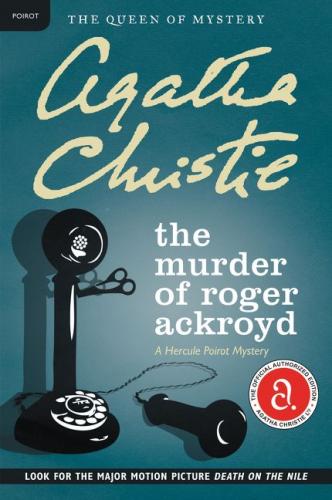 I recommend this book left and right because it's just such a superb example of the ridiculous prowess of the one, the only, the original queen of crime. The tale she weaves and the final reveal are nothing short of ingenious, especially when you consider how long ago she was killing the game (no pun intended). You think you know where she's going with this one and then BAM. Fooled you. All hail!  -Vanessa

“Agatha Christie’s indelibly etched characters have entertained millions across the years and a love of her work has brought together generations of readers—a singular achievement for any author and an inspiration to writers across the literary landscape.”—Jacqueline Winspear, New York Times bestselling author of the Maisie Dobbs novels

In this official edition featuring exclusive content from the Queen of Mystery, Hercule Poirot comes out of retirement in one of Agatha Christie’s ten favorite novels, which was also voted by the British Crime Writers’ Association as the “Best Crime Novel of all Time.”

Roger Ackroyd knew too much. He knew that the woman he loved had poisoned her brutal first husband. He suspected also that someone had been blackmailing her. Then, tragically, came the news that she had taken her own life with an apparent drug overdose.

However, the evening post brought Roger one last fatal scrap of information, but before he could finish reading the letter, he was stabbed to death. Luckily one of Roger’s friends and the newest resident to retire to this normally quiet village takes over—none other than Monsieur Hercule Poirot . . .

Not only beloved by generations of readers, The Murder of Roger Ackroyd was one of Agatha Christie’s own favorite works—a brilliant whodunit that firmly established the author’s reputation as the Queen of Mystery.