The Sentence Is Death: A Novel (Large Print / Paperback) 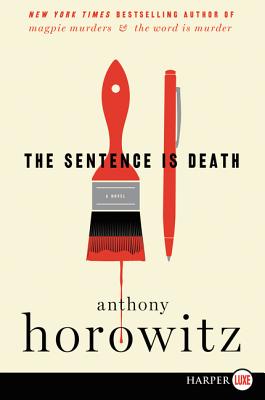 By Anthony Horowitz
$27.99
Out of stock. Available to order.

Death, deception, and a detective with quite a lot to hide stalk the pages of Anthony Horowitz’s brilliant murder mystery, the second in the bestselling series starring Private Investigator Daniel Hawthorne.

New York Times–bestselling author Anthony Horowitz and eccentric detective Daniel Hawthorne team up again in a new mystery, the sequel to the brilliantly inventive The Word Is Murder, to delve deep into the killing of a high-profile divorce lawyer and the death, only a day earlier, of his one-time friend.

These, heard over the phone, were the last recorded words of successful celebrity-divorce lawyer Richard Pryce, found bludgeoned to death in his bachelor pad with a bottle of wine—a 1982 Chateau Lafite worth £3,000, to be precise.

Odd, considering he didn’t drink. Why this bottle? And why those words? And why was a three-digit number painted on the wall by the killer? And, most importantly, which of the man’s many, many enemies did the deed?

Baffled, the police are forced to bring in Private Investigator Daniel Hawthorne and his sidekick, the author Anthony, who’s really getting rather good at this murder investigation business.

But as Hawthorne takes on the case with characteristic relish, it becomes clear that he, too, has secrets to hide. As our reluctant narrator becomes ever more embroiled in the case, he realizes that these secrets must be exposed—even at the risk of death . . .

ANTHONY HOROWITZ is the author of the US bestselling Magpie Murders and The Word is Murder, and one of the most prolific and successful writers in the English language; he may have committed more (fictional) murders than any other living author. His novel Trigger Mortis features original material from Ian Fleming. His most recent Sherlock Holmes novel, Moriarty, is a reader favorite; and his bestselling Alex Rider series for young adults has sold more than 19 million copies worldwide. As a TV screenwriter, he created both Midsomer Murders and the BAFTA-winning Foyle’s War on PBS. Horowitz regularly contributes to a wide variety of national newspapers and magazines, and in January 2014 was awarded an OBE.

“Horowitz succeeds on all levels with book two in the Detective Daniel Hawthorne series . . . the overall voice of the series is fresh and original, Horowitz writing with the effortless élan that distinguishes all his work.”
— Booklist

“Except for Jeffrey Deaver and Sophie Hannah, no one currently working the field has anywhere near this much ingenuity to burn.”
— Kirkus Reviews

“The Sentence Is Death . . . may just be one of summer’s greatest, guiltiest pleasures . . . Pray for solitary confinement, because you’ll want to read this one straight through and uninterrupted.”
— New York Journal of Books

“Horowitz mimics Golden Age authors (Christie, Allingham, Marsh, Sayers) so well in his books' scope and denouéments that fans of both puzzle and cozy mysteries will savor the balance of clues.”
— NPR

“The Sentence Is Death is...fast-paced, lively ... there are twists and turns and unexpected developments. The fact-fiction blurring continues to the last page.”
— Minneapolis Star Tribune

“Horowitz shows no signs of ceding the spotlight. He’s having too much fun and, as a result, so are his readers.”
— Los Angeles Book Review