The Churchgoer: A Novel (Paperback) 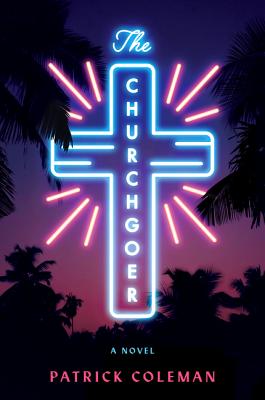 A LitHub Most Anticipated Book of Summer

"The Churchgoer is a wonderful debut novel from a writer with more than a few tricks up his sleeve.”--Los Angeles Times

A haunting debut literary noir about a former pastor’s search to find a missing woman in the toxic, contradictory underbelly of southern California.

“He was finished with church, with God, with all of it. But to find the girl, he has to go back.”

In Mark Haines’s former life, he was an evangelical youth pastor, a role model, and a family man—until he abandoned his wife, his daughter, and his beliefs. Now he’s marking time between sunny days surfing and dark nights working security at an industrial complex. His isolation is broken when Cindy, a charming twenty-two-year old drifter he sees hitchhiking on the Pacific Coast Highway, hustles him for a breakfast and a place to crash—two cynical kindred spirits.

Then his co-worker is murdered in a robbery gone wrong and Cindy disappears on the same night. Haines knows he should let it go and return to his safe life of solitude. Instead, he’s driven to find out where Cindy went, under stranger and stranger circumstances. Soon Mark is chasing leads, each one taking him back into a world where his old life came crashing down—into the seedier side of southern California’s drug trade and ultimately into the secrets of an Evangelical megachurch where his past and his future are about to converge. What begins as an investigation becomes a haunting mystery and a psychological journey both for Mark, and for the elusive young stranger he won’t let get away.

Set in the early 2000s, The Churchgoer is a gripping noir, a quiet subversion of the genre, and a powerful meditation on belief, morality, and the nature of evil in contemporary life.

Patrick Coleman's writing has appeared in Hobart, ZYZZYVA, Zócalo Public Square, the Black Warrior Review, and the Utne Reader, among others. His debut poetry collection, Fire Season (forthcoming from Tupelo Press) won the 2015 Berkshire Prize. Coleman also edited and contributed to The Art of Music, an exhibition catalogue on the relationship between visual arts and music (Yale University Press with the San Diego Museum of Art, October 27, 2015). He earned an MFA from Indiana University and a BA from the University of California Irvine. He lives in Ramona, California and works at the Arthur C. Clarke Center for Human Imagination at UC San Diego.

“The story of a very mortal and bemused former pastor turned private detective, The Churchgoer faithfully partakes of a California noir that will win over fans of the genre and make quite a few converts, too. It is, above all, the arrival on the scene of an excellent new talent in Patrick Coleman.” — Joshua Ferris, author of Then We Came to the End and The Dinner Party

“Nothing is sacred in Patrick Coleman’s utterly original debut -- not religion, not faith, not love, not family -- all of it can be lost at a moment’s notice. The one thing left standing in Coleman’s sun-bleached noir is hope, even for a cast of characters who are never quite what they seem. (And if hope fails, a little violence might do the trick.) This is pulp-fiction of a higher order, and maybe of a higher calling, the world of God and man clashing in a California beach town as unglamorous as the people who live in it, like if Kem Nunn found religion and then lost it, just as quick.”   — New York Times bestselling Tod Goldberg, author of Gansterland and the Burn Notice series

“readers will be curious to see what the author does next.” — Publishers Weekly

With a palpable nod to Raymond Chandler, this forceful mystery is an exploration of religion, responsibility, and the inverted forces at play in the modern world.   — Crime Reads most anticipated summer reads

“Coleman’s book reads like a tribute to California noir, but there’s nothing worn or derivative about it. The Churchgoer is a wonderful debut novel from a writer with more than a few tricks up his sleeve.” — Los Angeles Times