Magic Is Dead: My Journey into the World's Most Secretive Society of Magicians (Paperback) 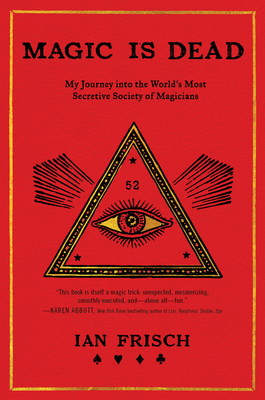 In the vein of Neil Strauss’ The Game and Joshua Foer’s Moonwalking with Einstein comes the fascinating story of one man’s colorful, mysterious, and personal journey into the world of magic, and his unlikely invitation into an underground secret society of revolutionary magicians from around the world.

Magic Is Dead is Ian Frisch’s head-first dive into a hidden world full of extraordinary characters and highly guarded secrets. It is a story of imagination, deception, and art that spotlights today’s most brilliant young magicians—a mysterious club known as the52, who are revolutionizing an ancient artform under the mantra Magic Is Dead.

Ian brings us with him as he not only gets to know this fascinating world, but also becomes an integral part of it. We meet the52’s founding members—Laura London, Daniel Madison, and Chris Ramsay—and explore their personal demons, professional aspirations, and what drew them to their craft. We join them at private gatherings of the most extraordinary magicians working today, follow them to magic conventions in Las Vegas and England, and discover some of the best tricks of the trade. We also encounter David Blaine; hang out with Penn Jillette; meet Dynamo, the U.K.’s most famous magician; and go behind the scenes of a Netflix magic show. Magic Is Dead is also a chronicle of magic’s rich history and how it has changed in the internet age, as the young guns embrace social media and move away from the old-school take on the craft.

As he tells the story of the52, and his role as its most unlikely member, Ian reveals his own connection with trickery and deceit and how he first learned the elements that make magic work from his poker-playing mother. He recalls their adventures in card rooms and casinos after his father’s sudden death, and shares a touching moment that he had, as a working journalist, with his childhood idol Shaquille O’Neal.

“Magic—the romanticism of the inexplicable, the awe and admiration of the unexpected—is an underlying force in how we view the world and its myriad possibilities,” Ian writes. As his journey continues, Ian not only becomes a performer and creator of magic—even fooling the late Anthony Bourdain during a chance encounter—he also cements a new brotherhood, and begins to understand his relationship with his father, fifteen years after his death. Written with psychological acuity and a keen eye for detail, Magic Is Dead is an engrossing tale full of wonder and surprise.

Ian Frisch has written for The New Yorker, The New York Times, The Washington Post Magazine, Bloomberg Businessweek, Playboy, Wired, and Vice. He has appeared on Bloomberg Television and speaks regularly at universities both about writing and entrepreneurship, and was a finalist for the 2016 Associated Press Sports Editors Explanatory Award. He lives in Brooklyn, New York.

“Magic Is Dead is itself a magic trick: unexpected, mesmerizing, smoothly executed, and—above all—fun. With verve and wit, Ian Frisch infiltrates a mysterious world with a vibrant cast of characters (I’m looking at you, Laura London), and explores the powerful nature of secrets—and why it’s sometimes best to keep them.” — Karen Abbott, New York Times bestselling author of Liar, Temptress, Soldier, Spy

“Frisch’s enthusiastic deep dive into the world of magic is infectious enough that it just might send readers to the stores for their own magic sets.” — Publishers Weekly